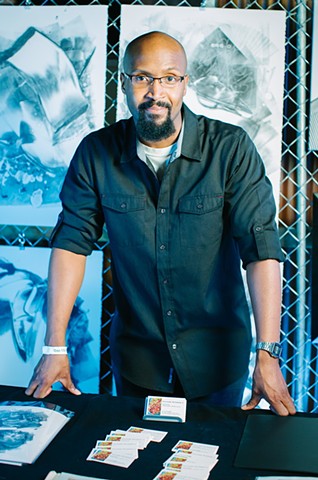 Philmore Peterson V is a painter and mixed media artist living and working in Dallas, Texas. Born and raised in Dallas, Peterson had his first solo exhibition, titled Revelations in Oil, at the Dallas Convention Center, in 2001, at the age of 14. Peterson holds a BFA from The University of the Arts and an MFA from The Ohio State University, both with a focus in Painting and Drawing. Peterson’s awards and honors include the NAACP Juanita Jewel Craft Community Service Award, The Presidential Scholarship and The Viola Foulke Scholarship from The University of the Arts, and The Ohio State University Fellowship Award. His work is included in the collections of Dupree Gallery (Philadelphia) and has also been featured in Columbus Alive, Rolling Out Magazine, & UWeekly. Peterson has exhibited his work in Dallas (TX), Philadelphia, Columbus (OH), Chicago, and New York City. Peterson is currently operating out of his studio based in Dallas.